Menu
Log in
Register
Install the app
You are using an out of date browser. It may not display this or other websites correctly.
You should upgrade or use an alternative browser.

DIY data recovery has risks. You could lose your data forever! Don't want to risk it? Talk to a professional now.

Thanks, Michael! Now that I know what to look for, I can see those values at 0x18E7C in the respective files. I'd been worried because the terminal was reporting 57 61 for the preamp of "EKLC" (see below) but I wasn't finding those values in the ROM anywhere.

In other news, the "8YVQ" drive was making a faint whining noise starting July 04, and by the morning of July 05 it was a loud grinding. When I power-cycled it, it is now giving its own "11 clicks of death" with intermittent grinding and can't be seen by the system. So now that drive is dead as well. That's okay, I'd copied its data elsewhere.

On July 07, I was able to get my terminal adapter working to talk to these drives. Well, the one working drive, anyway:

But the two drives giving "11 clicks of death" are not responding to the terminal at all.

After that the next step will be to build a DIY laminar-flow hood to minimize dust contamination, and then practice removing and re-installing the head assembly on the "8YVQ" drive now that it's completely failed. I also have some other old drives I can practice working on, although they won't be the same design; they're mostly 160GB and smaller.

At that point, if I'm feeling confident enough, I can try to swap the "EKLC" heads into my failed drive, and hope that it is revived long enough to transfer my files off of it.

I wouldn't attempt any of this. The only thing this will possibly do is make the situation worse.

It's not a BIOS, it's technically an EEPROM chip which is commonly just called the ROM chip in this field. You can certainly try moving the ROM or it's code to another board, but I can almost promise you the board is not the problem here. Beyond checking the contacts for obvious corrosion, I never even bother trying a replacement PCB on these before replacing heads. It's not worth the risk of additional power-ups of the drive with potentially damaged read/write heads.

Before you do that. Practice taking the heads out of the donor and re-installing them into the donor and see if it still works. Only after you've mastered your technique should you try this on a drive that has actual data needing recovery.
S

I'm interested in making sure the preamps match in these attached patient/donor firmwares. Also after if the head mappings are the same.

scottz":16ohnw7u said:
I'm interested in making sure the preamps match in these attached patient/donor firmwares. Also after if the head mappings are the same.

Not sure if you are still available to check those

Not sure if you are still available to check those
Click to expand...

Staff member
In case you didn't notice. PC-3000 has now automated this when you press this button: 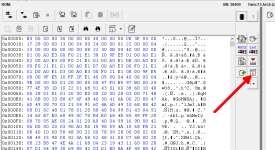 And you can see your preamp here: 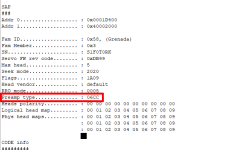 That's not your ROM, just an example from some random Grenada. Just reverse the two pairs, so you know this one is a CC 06 preamp.
C

Any chance you could take a quick look in this ROM. The "82 02" and "C2 02" donor I have used cannot write to the SA suggesting a mismatch.

Staff member
I don't have a sure way to read preamp from Rosewood ROMs directly. Most often, the issue of being able to read but not write SA is resolved by getting a donor with a closer manufacture date.
G