I have a WD 2.5" HDD that for no reason suddenly stopped being seen by Windows or Ubunto. Drive did not fall and does not make any strange sounds or clicks. Turns on fine, the spin sound sounds normal (no stuck head). When connecting to USB, PC will make the default sound you hear when you connect a device but it is not seen in any manager or data restore software, not as RAW, not as "undefined," nothing. So there is nothing to "scan."

Since it doesn't seem to be anything mechanical, I am going to try a PCB swap.
I'm going to try to use the USB connection before I might try to bypass the USB with a SATA connection.
As you can see in the attached screenshot, my PCB has two chips next to each other; one is the BIOS and one is a FLASH controller.
I found an identical model on Aliexpress and ordered it. Problem is, the one that came has two BIOS chips instead of one BIOS and one FLASH.

My question is, do you think it's enough to just swap the BIOS chip without touching the FLASH chip? Or do I have to order a different PCB that has both the BIOS and the FLASH chip so I can swap both? 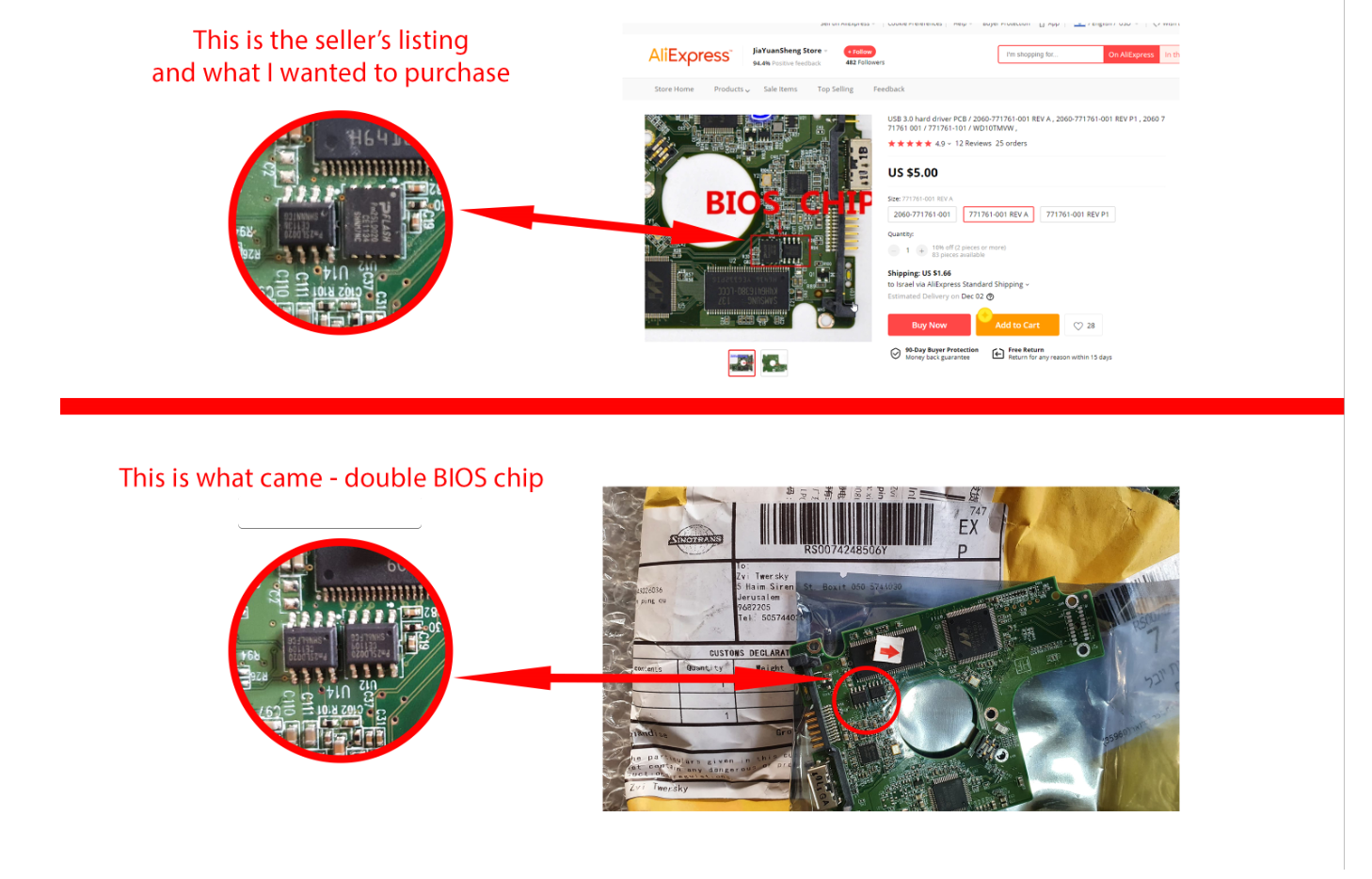 I give it 0.02% odds the PCB had anything to do with your issue. Most cases are firmware malfunctions due to bad sectors and/or weak read/write heads.

You're spinning your wheels messing around with the PCB. In all likelihood, you'll just make things worse.

@jared I am starting to agree with you that it's not a board issue and I don't need a PCB swap. I was told that it might not be getting enough amps to the USB port (which I was told is a common problem with WD passports.) So is there some adapter you can refer me to that can add power to the port?

So my question is, is there a way to just get the drive detected in Windows or Linux without swapping the PCB or chips. Would bypassing the USB port to SATA be enough to get it detected and scannable?
Round Rocks

Round Rocks wrote:Source of the post So is there some adapter you can refer me to that can add power to the port?

No, just be sure you are plugged into a USB 3.0 port rather than 2.0 (which can underpower) and be sure that you aren't using a USB cable that is too long or too thin.

Round Rocks wrote:Source of the post is there a way to just get the drive detected in Windows or Linux without swapping the PCB or chips

Yes, but it'll probably require tools you don't have like PC-3000 which can manipulate the firmware code of the drive.

Round Rocks wrote:Source of the post Would bypassing the USB port to SATA be enough to get it detected and scannable?

Ok thanks. One more amateur question... do you know of a way to get more power (amps) to the USB connecter? Some adapter maybe that allows you to connect a power cable to give the drive a kickstart of more power? I was told that it should be getting at least 1.3 amps and if it's not, might be cause it's not getting read.
Round Rocks

No. There is zero point to that. It's only if it's underpowered that it's an issue. If you are plugged into a 3.0 port and using a proper cable and are still having an issue, then power IS NOT your issue. There is no benefit to over powering a drive above spec. unless you want to be this guy:

Users browsing this forum: No registered users and 0 guests

About us | Data Medics

We specialize in data recovery from failed hard drives and RAID arrays among other professional data recovery services. This forum is dedicated to the sharing of information related to the field between other professionals. Our belief is that we are all more successful if we share our knowledge rather than try to keep it all locked up as a secret.